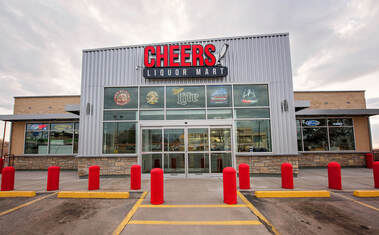 It was closed briefly in early 1995 by the previous owner and resurrected and remodeled by the current ownership in June of that year. Since that time, Cheers Liquor Mart has become the most award winning liquor store, beer store and wine store in Southern Colorado.  In 2000, Cheers Liquor Mart was chosen as a Market Watch Magazine Leader, designating the store as one of the best liquor stores in the country.
​We strive to provide Colorado Springs with the largest selection of spirits, wines and beers at the lowest prices in Southern Colorado. Currently we have over 8000 wine selections, 3500 spirit choices and over 1500 brews!

Over the past several years, we have proudly established ourselves as not only the best liquor store in Southern Colorado to shop for Spirits, Wines and Beers, but the only Colorado Springs liquor store that consistently supports our community and always gives back. We have supported hundreds of charities and  organizations and we continue to do so on a regular basis.

Please fill out the form below to receive Cheers Liquor Mart's weekly mailings. You will receive a weekly coupon, our Gazette ad the night before the paper comes out and our Newsletter featuring sales, specials, coupons, events and more.